Can I just say, Saturday's are Grrrrrrrrrreat! I look forward to Saturday all week long!

I mean, it's the one day of the week when I can pretend not to hear the boys fighting and pretend not to smell Sammy's poopy diaper and someone else will actually step in and solve the problem!!! (eventually, anyway...)

Oh yeah...and sometimes we do fun stuff too! Yesterday, for example, we went to the zoo. 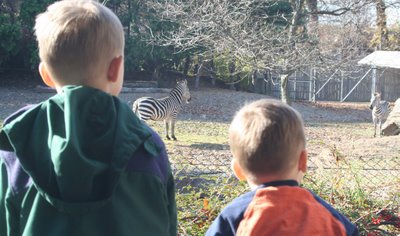 (Earlier in the summer I got caught up in a "Join today and this visit is FREE!" moment when paying admission to the local zoo. I bought the family pass just KNOWING I'd be visiting at least weekly all summer long. Well, yesterday was my second visit.)

It's actually been quite good weather here lately so after a morning of me dodging all parental responsibility, we loaded into the mini-van* and went to the zoo.

Just as we were getting started, I noticed Maxwell's favorite school friend, Shawn, coming in with his grandparents. There were gleeful shouts of "HEY BUDDAY!" (that's the proper New England pronunciation) and the two little blonde boys were off to try climbing into the animal enclosures. (With Sammers following close behind.) 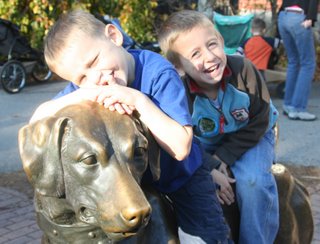 After getting our fill of cute animals and foul smells, we were on to our next adventure. We were just leaving the park when NavMan spotted a "yard sale" sign. Since it was late afternoon by this time, the yard sale was the very best kind of yard sale...the kind where the sellers have gotten bored, gone inside, and left everything on the curb free for the taking. Max scored a nearly new "Slinky Dog" toy, (think Toy Story) and a fluorescent pink plastic tube thingy that you spin and it makes noise (great for whipping parents and younger siblings).

We, the imminently practical parents, scored an inflatable boat with two oars (that I somehow doubt will ever inflate) a big wreath, (that I'm going to decorate for the holidays) and the coup de gras: A swimming pool! I wasn't too sure about this last acquisition as it IS the end of Fall/beginning of Winter, but SuperDad was determined. This is a LARGE sturdy plastic kid pool that when shoved into the van completely obliterated any sign of small boys in carseats. (It took Sam awhile to quit panicking under there and I'm afraid he may now have claustrophobia issues as an adult.) 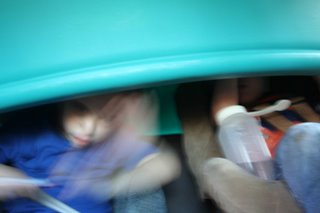 Next stop: Newport Creamery. Baby in utero was craving grease in the form of French Fries and a Hamburger. CalBoy, of course, had to ask what he always asks: "If I ordered a 'Milk Shake' what would I get?" The answer, this time, from the confused waitress was "An Awful Awful." "DUH!" was also implied in her tone.

***The Rhode Island "Milk Shake" or "Awful Awful" is milk with flavored syrup in it. To get something with ice cream in it you have to order a "Cabinet" or a "Frappe".

In the mean time, the couple at the table next to us were giving their one-year-old a "Coffee Milk" in his sippy cup and saying "Here's your Coffee Milk! Now you're a real Rhode Islander." ...No, I'm not making this up. ***

After lunch and once again shoving the boys under the pool, ("Get your heads back in the pool!!!") we made our final stop at Toys R Us. The idea was, we'd see what Max wanted to play with and therefore know exactly what to get him for Christmas. Turns out, he likes everything, played with everything, and wants us to buy him everything. D'oh!

That pretty much chronicles every single moment of our day. (I'm sure you found it as thrilling to read as I did to write.)

SO, until another Saturday has come and gone, (unless I think of something funny before then,)TTFN! Ta ta for now!!!

*It's hard to be cool and drive a mini-van...but I manage it.

Note: Never read spouse's blog with spouse near by...One may get in trouble for not chortling at the right moments. (Also, one will be hounded for any mispellings or grammer errors while commenting and/or blogging oneself). MISSPELL THSI!!!

There are not a lot of things better than a good chortle. Especially when it is AT the expense of the "marionette." Put down the fist of furry women. You're not scarring anyone. Put it down and get your head back in the pool.

*That* is not a milk shake.

maybe you could fill the "ool" (no not with p) with water and let it freeze once your weather turns cold, and then you could ice skate. FHP

Emily said...
This comment has been removed by a blog administrator.
5:13 PM

I, too, like a good Saturday. We haven't had one in a while. I think it's time for the Mr. to take his nose out of the books and play with the fam!

wanna go do fun things...I'm no fun without you Em. It's like the fun has been sucked outta me. I don't have Maximus to do something silly and make me laugh, I don't have Sammy giving me professional crusty's to keep me on my toes, and I don't have a friend to sit around in my pajamas with while drinking hot chocolate.

I need a Dub fix.

Oh, and to include DougiePoo, I don't have him to make fun of. Life sucks.