Hi Friends,
Thought I'd pass this along.  Anna is one of my former pottery students.  I asked her if I could publish this here.  She's just started a blog.  Check it out after you read the following!  Everything below is property of Anna!

Hello,
My name is Anna Kenkel.  I am a US Air Force Reserve Officer, a high school history teacher, an Air Force Wife and mother to a baby girl.  I have the priviledge of living in Misawa, Japan, which was impacted by the March 11th 9.0 earthquake and tsunami.  Our town has recovered, but many communities very close to us are still suffering. 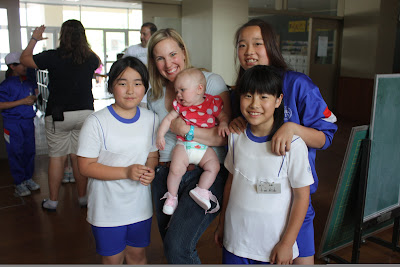 We woke up this morning to yet another big earthquake – a 6.7 about 50 miles from us.  I’m not sure how many we have had up to this point, I only know we surpassed 1,000 months ago.  I then find out that 6 people died from the shock of another earthquake.  6 people whose shelter I visited just hours prior.  Did I meet these people?  Did my presence help them in any way in the last hours of their lives?  I will never know.  Even with these frequent reminders of the tragedy that changed the lives of Japanese just over 100 days ago, I have become ignorant in the preceding months to the suffering that is still occurring just 100 miles south of us.  Yesterday, I had an incredible opportunity to wake up to reality by seeing the devastation and desperation that is occurring as you read this note.  I am still trying to process everything I witnessed.  I am physically and emotionally drained from this trip.  I would like to share my experiences in hopes that you may be called to act in some small or big way and don’t become blind to needs of those who still suffer.
It took us a long time to get to Otsuchi, Iwate Prefecure mostly because it is ruggedly remote.  You have to take windy, often one-laned mountain passes to reach this area of Japan.  I can only imagine how this has hampered recovery efforts.  Finally, after nearly 4 months, debris blocking the roads has made this area accessible.  I was first struck by the beauty of this area.  You are admiring the green covered mountains and then, like a slap in the face it appears:  absolute devastation.  My first thought was this must be what a war zone looks like.  Yet, as I got closer and deeper into the destruction, I thought this must look more similar to Hiroshima, August 6, 1945.
As we drive through the streets of Otsuchi, there are very few structures still standing.  Those that remain are either burned out shells of their former selves or mangled pieces of concrete and steel.  Beyond that is just dust and debris.  Every inch of this city is covered in silt, dirt, twisted metal, missing shoes, warped parts of cars, torn sweaters, broken pieces of homes and perfectly preserved photo albums of lost loved ones.  We pull into the parking lot of the former city hall.  A hollow building with a giant clock forever preserved with the time the tsunami struck.  I later meet the only survivor of this building who hung on to the roof for over 12 hours as the oil in the water and buildings near him burned with fury.   He may never fully recover from his external wounds, let alone those he carries within him every minute of his life.
Our guide introduces us to a local man who happens to be a famous jazz musician in Japan.  He wants to show us the remains of his home and take many pictures.  He pleads to us to share Otsuchi’s story with the world.  His desperation for any help, especially our small group of mostly American women and students, lingers with me.  That’s when I realize how bad the situation really is.  He continues to apologize that he is unable to serve us tea as we are staring at what appears to be a car in the middle of his house.  We also discover from our guide that as he is showing us the pieces of his former life a DNA test is being conducted on the remains of a man who resembles his father.  He tells us he drove to pick his father up at the Dentist’s office when the earthquake happened.  He didn’t make it.  He saw the wave fast approaching and had to turn around if he had any hope of surviving.  He was able to save an elderly neighbor, but not his father.  Imagine, the guilt, the torture.  However, this man is smiling.  He is thrilled outsiders are here.  He has felt as if he and Otsuchi have been forgotten by Japan and the rest of the world.
Otsuchi had 15 minutes from the time the earthquake struck to the time the ocean unleashed its wrath.  I was amazed there were any survivors since the higher ground is quite a bit away.  Survivors told us the wave appeared to be a giant cloud as high as the local mountain summits drifting to shore due to the dust kicked up by the water.  They had no idea the sea was about to crash down on them.  I walk through the streets trying to absorb every image and to attempt to grasp the terror experienced here on March 11th.  I see a single child’s boot and a backpack lying on the ground.  I cannot fathom the idea of a small child being swallowed by the freezing ocean water and debris.   What would Lily think if she found herself in the same situation?  I see a man on a stationary bicycle. Odd.  I quickly realize that is how they pump gas.   2011 and a stationary bike is needed to make a vehicle run.  I then see a man polishing his semi-truck in typical Japanese fashion.  It looks perfect and shiny as if it just rolled off the factory line.  The irony of this glossy, beautiful thing amidst the destruction almost made me laugh.  We continue to press passing mile after mile of debris hills nearly 50 ft high.  I was told they recover human remains on a daily basis. 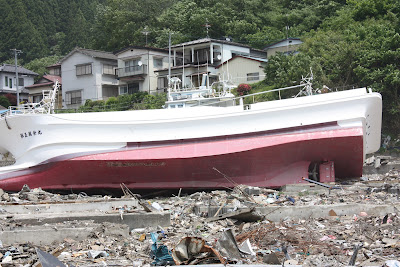 Finally, a reprieve!  We head to the only surviving elementary school in the area.  Four schools have combined in this very crowded building.  We play games, pass out new backpacks filled with school supplies and share American treats.  On the surface, they seem like average children and we have a blast with them.  They are happy, smiling, giggling.  That outer façade hides the fact that every single student has lost at least one loved one.  A parent, a sibling, an aunt, a grandfather, a cousin.  Twelve students in the school are still waiting for someone to recover both Mother and Father so they can finally say goodbye.  Imagine being in school and every one of your friends is grieving, coping and trying to figure out how to move on.  Imagine seeing your town lying in ruins everyday and living by the water that caused so much pain.  How do you recover?  At 5, 6 or 7 years old, would you be able to understand it or would it simply be too much to bear?  During our time at the school, I was struck by the power of simply showing up.  You could tell by their smiles how much it meant to them that people cared and remembered them.  I truly believe Lily, my 6-month old daughter, made a difference through her smiles and giggles with the students.  I learned it does not take much to make a difference in the lives of people who have so little.
We ended our journey at one of the numerous shelters to drop off supplies.  This one was a small, un-air conditioned building sitting in 90 degree weather.  Every inch of floor is claimed by the surviving members of families.  There is no plan for their next step in their dim future.  The government is ignoring this part of the affected area.  This city is poor and has many elderly.  All the city officials were killed, so they have no politicians petitioning for their needs.  They desperately need help.  They need someone to remember and care.  The musician surprises us with an impromptu concert.  He lost all of his belongings, including every instrument.  A 90-year old lady from the south of Japan sent him a 150-year old wooden flute.  I listened as he played Amazing Grace for us while tears flowed down his face.  I could not help but to leave my own tears on this beautiful and broken land. 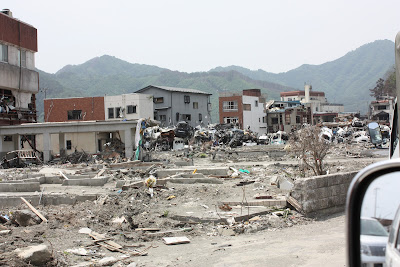 NOTE:  Next month, I am climbing Mt Fuji with my family and I will be doing so in honor of Otsuchi.  I will be climbing to 5 stations.  If you feel inclined to help, I am asking people to sponsor each station I reach.  I would like people to pledge at least $5.00 for each station for a total of $25.00.  All money will go to an Otsuchi Relief fund for survivors.  Its skips the bureaucracy and goes directly to those in need.  If you are interested, please contact me at anna.kenkel@gmail.com.  Pass to your friends!