Haircuts courtesy of Doug. The tightwad! He made my baby grow up overnight!!! 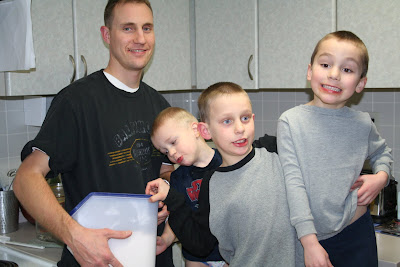 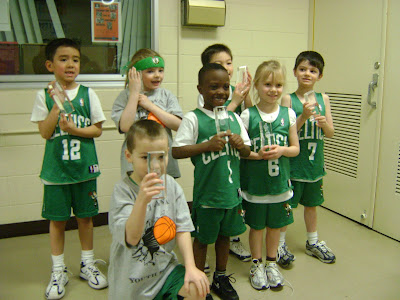 (Basketball ended for the boys today and they both got trophies, t-shirts, and end-of-season parties. BEST DAY EVER!!!) 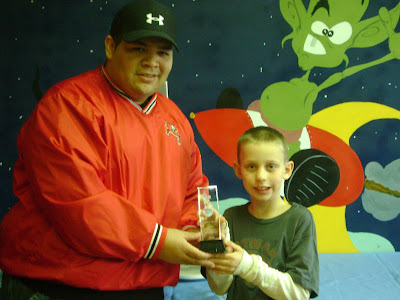 (It's really hard trying to spell kid-speak foe-neh-ti-cally!)
(Yes, I know it's not spelled that way.)
BTW, two Saturday's ago, Sammers said the same thing ("best day evo!") as we were leaving the AIRPLANE MUSEUM (just off-base) with our good friends whom we will just call "The Much-Cooler-Than-You-Fighter-Pilot Family". And that despite the fact that he got lost for about 20 minutes by wandering OUT of the museum to look for us.) Ah, boys... 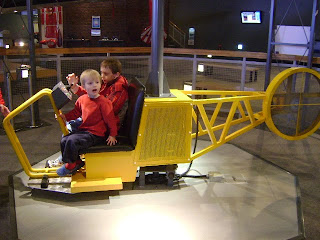 Speaking of boys, how's the Fruit-of-my-Womb you ask?
Well, he's been in the slow cooker for exactly 37 weeks now. Just three to go! And since the last three Dub-brothers came a week early, I expect this one to do the same, dangit!!! (He's head down and slightly engaged. And yes, he's still able to kick me in the throat. Yes, you wanted to know that.)
And no, he still doesn't have a name.
And yes, he has grossly distorted my previously extremely perfect belly button. (And by "previously", I mean previous to four pregnancies.)
And yes, his current residency/squatterage is causing excessive Acid Reflux driving me to a strict diet of cold cereal and PB&J sandwiches. (And spinach/fruit smoothies. He's fine with those. But no pasta, pizza, curry, anything cooked, or anything with any flavor or seasoning of any kind.)
And yes, I'm tired and cranky and sick of the dang wet weather and ready for SPRING ALREADY!!!
Doug? Doug is sick of catering to my every whim, my Tums breath, my having to sit straight up in the middle of the night to burp and/or waddle to the bathroom, and my complete apathy towards all things house-keeping/meal planning/cooking related.
(Though I'm sure he wont admit it for fear of my excessively hormonally imbalanced wrath.)
While I'm at it, let's just make this a complete for-posterity journal entry about all the boys!
Maxwell: Recently had to spend lunch with the principle after tripping a girl at recess. He says she told him to "trick her" but he misunderstood and thought she said "TRIP her". (He was just being compliant!!!) The jury is still out on whether or not we believe him. Regardless, he lost his hour of Wii on Friday 'cause it's not okay to trip even if you're asked to.
Aside from the occasional incidences like the one above, he seems to be doing pretty well this year. He's starting to actually like reading (not just being read to, which he's always loved.) and he can be very helpful around the house if he thinks it'll earn him a few extra minutes on afore mentioned Wii. (Which he's only allowed to play for an hour on Friday and two hours on Saturday. IF his chores are done.) He's cute. And he makes his own, and Sammy's, lunch every morning. For which I love him an extra lot.
Samuel: Has been caught wearing a collared shirt AND some NON-SWEAT PANTS of his own volition*!!! This is serious progress and cause for much secret rejoicing by his parents. (We can't acknowledge these things lest he stop doing them just to defy us.) He hates everything we ever have for dinner unless it's healthy pizza or healthy pancakes. But he's still cute and he throws fewer tantrums now that we have "special play time" with him everyday. (That's 5 minutes of child/Sammy-directed play--alone with a parent--no interruptions.) 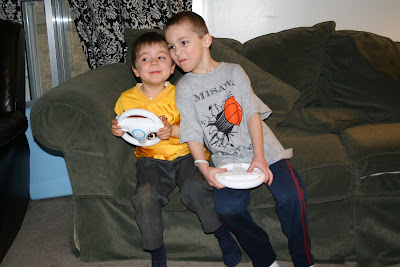 His best friend is "Chipmunk" who lives a few doors down--they MUST play together daily or melt-downs occur. His girlfriend is Caroline (though she hasn't agreed to this) because, as Sam says, "Weo nice to each otho." (Payden is his only other friend in the world and he refuses to like anyone else. I'm sorry to all of you who thought you were his friend. He thinks you look funny, talk funny or smell funny. Sorry again.)
Gabriel: Already loves his baby brother. (Let's hope it lasts!) He likes to yank away all the layers of my highly restrictive and uncomfortable clothing until my belly is exposed and then he sits and talks to his baby bwah-yo...(whom he thinks we should name "baby bwah-yo".)...in baby voice. Which is pretty funny coming from an almost three year old who hasn't quiet mastered speaking himself.
As in: "Hi-Yo Bwah-Yo!! You come out now? You so coot! Tick-o, tick-o!!! Peek-a-boo!!!" ...said in a high, sing-song voice.
Gabey's best friend is Madeleine--who has cut her hair at least three times while under my obviously deficient supervision. They like to play "Doctor" but since most medical treatments are administered below the knee, I let it slide. (The other day Madeleine was giving Gabe his shots with a very large round Nerf gun. That would be quite the injection.) His best-frenemy
is Isaac. They alternate between sharing toys and playing together or fighting over toys and chasing each other.
And THAT is an update on our lives and my justification for blogging! (It's my journal! I'm doing it for the CHILDREN!!!)
It's 9 p.m. I'm being kicked in the throat. I'm going to go have some cold cereal now and then Doug and I will watch "Psych"!
The End. 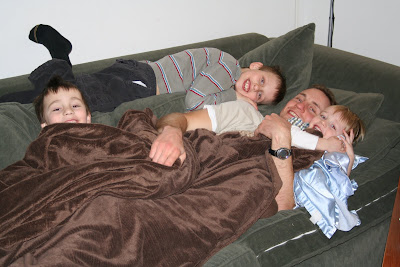 *I looked this up just to make sure I'm using it right...and I AM!

Email ThisBlogThis!Share to TwitterShare to FacebookShare to Pinterest
Labels: Cute Kid Quotes, Just for the record

First, I hope your baby come right when you want and you do not have to wait.I started getting acid reflus just reading the post... sorry!

I have to give Max props.. if the trip story is made up that is some quite and creative thinking.

I loved hearing about the boys...thanks for the great update and especially being so delightful at this stage of pregancy
Claudia

One word for you: Prilosec!

"Healthy pancakes?" -- Doug, "can we have milk since Doug is over?"

I love that tripping story! So funny!!

Hope you are feeling well and that baby comes out sooner rather than later!!! =D

If I don't take my pepcid before bed, I wake up around 2 and never go back to sleep.

And my back gets so stiff at night that I get up every hour and pace around the room to loosen everything up. It really creeps out my husband.

But MY torture will all be over tomorrow! He's LATE, but the doctor is going to smoke him out with pitocin.

of course you used volition correctly!!! I expect nothing less! but you didn't have to tell us you doubted yourself!