When Doug said he wanted to join the Armed Forces to pay for school, I said "NO! Absolutely NOT! What if you have to go to WAR?!?!"
But there was no war. Just the potential for a lot of debt. So we kept thinking about it.
Then there was 9/11 and I said, "Okay, now you REALLY can't join! We're going to go to WAR!" And he said "Now I really WANT to join and serve my country!!! Besides, what are the odds I'll be deployed?!" (Slim to none, according to the recruiter. That was when the war was just a baby.)
And I was proud of him. And I didn't want all the debt. So we joined the Air Force and went merrily on to Dental School.
(And in case you think we're debt free because we joined, think again. In fact, think in the 200k range. We went to school in San Francisco.)
Fast forward to now. Turns out, had Doug not decided to do PEDIATRIC dentistry, there are very good odds he would be deployed to a war zone at some point. BUT, since he's the only Ped Dentist on base here, he's not going anywhere. (Except on a humanitarian mission to Thailand. But that's only for three weeks.)
Unlike his office mate/sponsor/best buddy Merrill. A Dentist. Who is--right now--getting combat training in America before being deployed to Afghanistan.
Merrill gave me permission to reprint this letter he sent us. (See below.)
I thought it was a good reminder to everyone back home that there is, in fact, still a war going on. And families who are already serving their country in BFE, I mean JAPAN, still have to have their spouses deployed for LONG periods of time!
(Deployed spouse + living in Japan = not a lot of help available from family back home and a long lonely deployment! Currently, there are three families in our church branch with deployed spouses. And more deployments coming in the new year. Our Branch President was deployed months ago and had to be released. He's still gone. His wife and four kids are still here dealing with it.)
Anyway, here is Merrill's letter:
(FYI, he is in the Air Force, but being trained by the Army.) 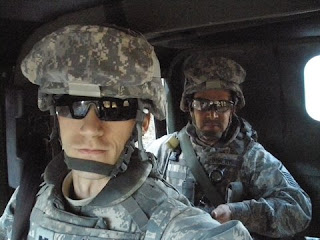 My wife loves me so much! She would fly around the world to
potentially only spend 30 minutes with me. Some may call it crazy,
but I call it love.
I graduated my Combat Skills Training at ______,__ and have moved on to Detainee Ops Training at ______ in _____,__.
We are in the middle of nowhere. Not the most scenic
place but probably the best place to be simulating a deployed
environment in the Middle East.
Our unit had to get special permission to bend the rules of "General Order #1" (the rules you live
under when you are deployed; e.g. no civilian clothes, no riding in
anything other than a government vehicle, no going off base, etc) so
that several of us could see the family members who came to see us.
We didn't know until we got there on Friday that they were going to "let
us off" until Saturday night at 10:00 PM. The Army is so generous!
Janeen knew she might only be able to see me at the airport before
I was taken away to our new "home". At least we got to spend a day
and a half together. I felt like I had been let out of prison.

Janeen was able to come out to Camp _________ a few times to meet me at
the little recreation center they have there. At least I didn't have
to talk to her by telephone through a glass wall. Although it was
short, it was a huge boost to my morale. It was so nice to be with
Janeen and have some snuggle time with Emma. I really hope Janeen's
travel goes smoothly back to Japan.

Our last week at __________ was a lot of practical exercises where we
would put together all the skills we had been learning the previous 4
weeks. We went out on convoys to small villages, interacted with the
"local nationals" (actors they had hired who dressed the part and
could speak the language), searched homes, were attacked by IEDs,
mortars, and snipers (the Army instructors love setting off their
pyrotechnics).
Most of the people in my class thought it was a lot of
fun, but it seemed a little too realistic to me and I didn't enjoy it
that much. The whole month just made me very thankful that I will not
be doing those things over there and gave me a much greater
appreciation for the soldiers who are doing those things. Every time
they leave that base, they don't know whether or not they will be
coming home that night.
These are some very brave men and women.
I would send an address here to you but I don't know what it is, and I
won't be here long enough to get any mail anyway. Looks like I will
be spending Christmas in Kyrgyzstan in route to Afghanistan. Sounds
like a great time. I will send along an address once I get settled at
_______.

Thanks to all of you for your prayers and support for me and my family.
Merrill 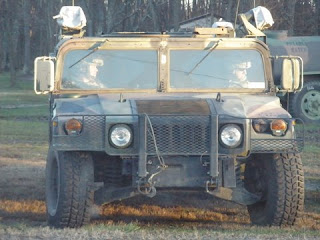 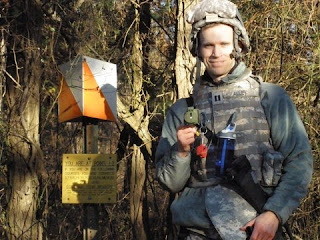 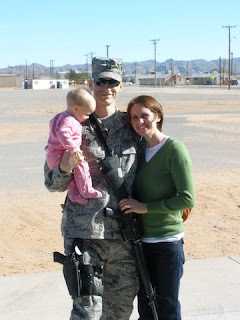 Email ThisBlogThis!Share to TwitterShare to FacebookShare to Pinterest
Labels: Living in the Military

Wow. I am glad that Doug doesn't have to be deployed, but I am so sorry for your friend. I will keep him and his family in my prayers.

Merrill is one brave man. His letter and pictures brought tears to my eyes... I know he didn't REALLY do it for the other dentists, but I am grateful for his decision.