Doug got home from his TDY* to San Francisco a few days ago. What? You didn't know he was gone? That's because I didn't tell you, CREEPY STALKER!!! (Have I mentioned lately that I live in a gated community protected by armed guards? I do. Plus, I keep a 50 lb. MagLite about my person.)
Anyway, he was gone for over a week. Went to a conference, learned some stuff, saw his wonderful parents, brother Mark & Co., went to eat with some fabulous old friends, and basically had a grand ol' time. (Plus, he did all of the shopping and fetching I required of him.)
AND, he ate out a lot. Jerk. (Doug's family; I use that affectionately.)
--Extensive and over-long digression:--
Now, since I've been pregnant, we (or just I) have been eating out a lot more. In fact, we (okay, I!) over spent our eating-out budget last month by, like, a LOT. Because when you're pregnant, and puking, and all of the sudden something sounds good--not just good--LIFE SAVING, well, you get it and eat it immediately.
For example: One day I went in to Arts and Crafts on a Saturday afternoon. I was hand painting some pots. My co-worker offered to get me lunch at the base Popeyes and I, being nauseated, but hungry, agreed.
Do you know what Popeyes is? It's a southern place like unto KFC. They do a lot of deep frying there. As in, everything on the menu is soaked in oil before being cooked and they don't even pretend any of it has nutritional value. This was my first experience actually eating food from there. She (co-worker) got me a meal. Three chicken strips, french fries, a biscuit, (bleh to biscuits) and large a root beer.
Let me tell you how often I order a fast food meal like this: Never.
But that day, it saved my life. Those french fries (which were greasy enough to have been triple fried) were the best artery-clogging goodness I've ever eaten. I thought about that meal all weekend long and went back Monday morning at 9:30 a.m. for seconds. A pregnant woman's gotta do what she's gotta do.
Since then, there have been more desperate cravings for Taco Bell Nacho's Bell Grande, (another new one for me--I'm usually a '7 layer, no tomato' girl.) Shrimp & Veggie Tempura, more Nacho's Bell Grande, Salmon, Steak, Hamburgers with fry sauce, a Chocolate/Banana shake, fruity carbonated beverages, and peanut butter apples.
All of these things, when I got them in my hot little hands, were the best things I'd ever eaten.
Until Thursday morning when Doug got home.
--Now back to the point:--
And he gave me this: 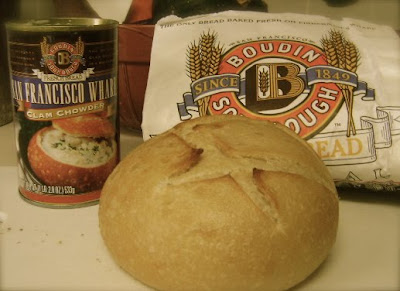 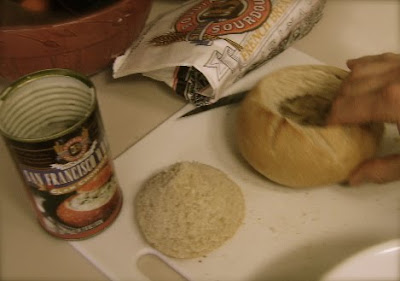 BEST!LUNCH!EVER!!!
(at least until I start craving nachos again.)
Welcome home Sugar Lips!!! And thanks again for LUNCH!!!
*Temporary DutY: (Most of the acronyms around here make no sense.)

Okay, wait, you're telling me that your base over there has a Popeye's with BISCUITS and ROOT BEER and a Taco Bell?!?!?! Where exactly are you guys stationed and how can I get in for the food?

Yep! The base has two free standing restaurants: Popeyes and Burger King. And in the BX food court we have Taco Bell, Pizza Hut, A&W, Baskin Robbins, and Subway!

If you're ever in the neighborhood, give me a ring and I'll sponsor you on base!
:)

Is kind of weird that I have also had a hankering for Nachos Bell Grande, all things chocolate banana, and I ate clam chowder in a bread bowl 3 meals in a row while I was in Boston last week? I had a serious craving for BBQ tonight, which I fed, but now it is 1:38 am, and I am up with reflux, plus I'm gaining tons of weight (I am afraid to go to the doctor, is that bad), so maybe it is time to stop giving in to EVERY craving I have?

But go ahead and keep your ideas coming. I've also been eating tons of chicken salad sandwiches and tomato soup, in case you need a new idea.

Well, I'm glad you got a great lunch. I craved Taco Bell when I was preggo too, but now I can't even think about that place without gagging. Go figure. Hope you are feel well! When is your due date?

When we were stationed in WA and I was preg with my son I hit Popeyes a lot too. Not for the chicken and fries, but for the potatoes & gravy. MMMMMMMM. And the cole slaw was ok...I've had better, but it was better than only taters. LOL

My Taco Bell cravings were with my daughter.

What happened to the steak cravings!? If you ever come to SF, I will be so mad if you do not tell me. We don't live that far away neighbor!:)

You have the Best. Husband. Ever!

I always tell my husband to stop buying me presents for birthdays, christmas, anniversaries etc. JUST BUY ME FOOD!

You are so funny! What baby wants baby gets is my motto! I could actually hear you as I was reading that! Miss you soooooooooooooooooooooo much!

We aren't even that far away but that bread made me homesick for SF. I hope the nausea wears off soon. Nothing like feeling pukey and still taking care of 3 kids eh?