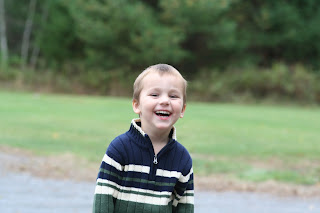 I'm a victim of abuse. Child abuse. My child is abusing me! Samuel's naturally angelic nature seems to have been suppressed lately. Like for the last year.

Today Sam bit me approximately 3 times. Hard. Really hard. Hard enough that I'm sitting here looking at bruises, complete with teeth marks, on both arms. I have a really big one on my thigh too, but since it isn't "daisy-duke" weather, it's safely hidden.

This isn't the first time this has happened either. If we were going on the "three strikes you're out" system, he would have been thumbing his way across America to get to Grandma's house long ago.

One major cause of strife lately revolves around dressing. Sam doesn't want to get dressed. Or undressed. Or redressed. He tells me his clothes are dirty. And too hot. And too cold. And too yucky. Or that they're Maxwell's. Or Gabriel's. Or Daddy's. Too small and too big.

When I tell him we have to get dressed so we can go somewhere, he tells me he doesn't want to go to school. Or the store. Or the Doctor.

But, since we usually have to do these things, we have to get his clothes on. So I put them on. Against his will. And he struggles, and screams, and kicks, and bites me. Hard. (And usually he strips again the first chance he gets.)

I've tried all the bad parenting techniques. I've yelled at him, spanked him, bribed him and bitten him back. (Don't freak out, I only did that once, and not hard enough to leave a mark.)

Nothing has worked.
And I need help. Serious help!
Because when I say "Bite me!" I don't really mean it!
HELP ME!!! 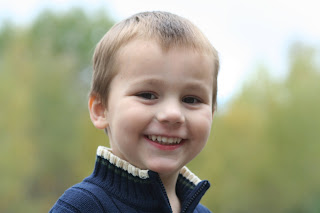 Email ThisBlogThis!Share to TwitterShare to FacebookShare to Pinterest
Labels: Bite Me

I really do feel for you. It seems like you have lost all control. Just give hime away and do a better job with Gaby baby. Sorry. Wish I had better advice. I'm currently tring to get rid of my eldest. Any takers?
G

Wow, thats a hard one. Maybe you should just wall yourself inside... My second child is a notorious streaker, and we have had to deal with her preference for all things naked for several years now. We have found that nothing cures the stripping fetish better than a brand new pair of (very comfortable) leopard print pants, with matching kitty shirt (which she picked out on her own). Even if she has to wear said outfit every day for a week, which for a brief period last year, she did, it is much better than putting a naked kid in the shopping cart at the grocery store. I'm sure Sam would pick out something a litte more manly than leopard print, but you get the picture. As for the biting, just spread tobasco sauce all over your body, that'll teach him.

this is totally random, but my neighbor's kid has some sort of sensory problem where he hates the feel of clothes on his skin. if it's freezing outside and he must wear a coat, he pushes the sleeves up. that kind of thing. she has him in some sort of occupational therapy for this and other symptoms of this sensory thing. anyway, not to make you all worried or anything. i think my neighbor is kind of crazy anyway. :)

yeah, that sounds crazy. I'd just give him away. Its a lot less expensive than therapy, trust me.

hang in there! he will get over it. we all have to get dressed each day, whether we like it or not.

My first-born was a terror. The worst most rotten baby to 2 1/2 years EVER. I promise and have many witness'. He was a biter too. And he bit me on the fanny once so hard I thought a wild animal had attacked from behind. I was banished to nursery to supervise just HIM. Anyhow. He he almost 7 now and is almost a lovely child. Typical for his age and no longer biting. I say let the kid run naked- just watch the backside at all times.
But, I used hot sauce (foreign serious hot kind) and he did not mind it. I tried time outs and isolation and toy removal, but the cure was bite back. Sorry folks. It's the truth. And my honey is an MD. Not what the books say. But it was the only thing that seemed to correct the urge.

Who's in Charge? HMMMM????
Do Love and Logic for real this time! It's all about the CONSISTENT consequences. Consistency is what makes the nice parent a good parent.
Lynanne (Diane's bossy big sis.il)

next time he takes his clothes off throw him out in the cold and see if he likes it. do that every time he does that. when he bites you, bite him back, harder... i am 13 years old... (i am the son of dianes big bossy sis.il)

(Your blog was a FHE object lesson for our family, thanks!)

Gin,
I'll trade you straight across.

Lisa,
I'll have to look into the leopard print option.

Leslie,
It's not a sensitivity thing 'cause once he's dressed (and undressed and redressed) he's fine and his clothes don't bug him.

Lacey,
Once, I was standing at the stove, and Sam walked up and bit my bum. Hard. Unprovoked. It hurt.
At the moment he's asleep. I think now would be a good time to get him back for that.
Be right back...

Alright Big Bossy Sister and Progeny,
I forgot to mention that I consistently made him bite soap. Like 300 times in a row. And that didn't work.
And lately I really have been doing Love and Logic consistently. Which is why I have so many friggin' bite marks on me.
Because Love and Logic says nothing about body armour. But they DO suggest saying "Ah come on! You can do better than that!!!" Which only leads to more pain. For me.

They also suggest saying, "That's so sad! Looks like a little bedroom time!" Which is why I've spent so much time standing in my hallway holding his door closed with one hand and trying to read Love and Logic with the other hand.

Now get that 13-year-old over here so HE can hold the door closed for awhile!!!

MY ARMS ARE SORE!

Trade Ani for Sam and everyone wins - except that would mean that Ani and Max would be siblings and therefore couldn't marry (which they have been planning for quite some time).

I've said this before and been banned from play groups, but I'll say it again. Duct Tape!!!

Emy! Why are your children so beautiful and hilarious? I couldn't stop laughing when i read that Sammers has been biting you - I'm sorry, it was just a really funny mental picture. I love children. So much. Especially yours. Hm.. he can't bite if he's eating something he likes right? Buy a really big box of gummies and anytime he needs to get dressed, give him one. And just let him sleep without clothes on. Or OR ORR send him to me and he'll be so happy to see me and Alex that he'll forget he has teeth!

Is it too early for military school? Maybe someone should invent military preschool where the drill sergeants bite back. Hard. Any takers?

Yikes! I'm sure it will get better soon -- just keep being consistent, which I'm sure you are! It seems like that's what Dr. Phil always says right?

Is it a transition thing? Evan has always had trouble with moving from one thing to the next. I have to constantly prepare him for what's to come. We now make getting dressed a competition. "I can get ready before you do." "Ready, get set, go!

But honestly, who knows what's going on in their little heads sometimes. I sure don't, I was perfect!

Hey. Just thought of a book for you. Raising Your Spirited Child. I used to read a little of it every night before I went to bed. It has helped.