In the near future, the whole fam-dam will be boarding a plane headed for San Diego. More specifically, Carlsbad. And I can hardly think of anything else. But BEFORE that, we have the rest of the week to get through. So to get my mind back to the present, I'm going to honor Fabulous Photographer Jen's request for a little Gabe update. 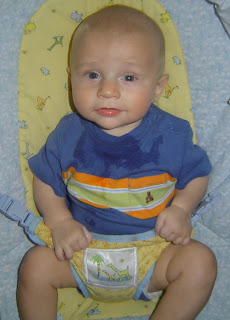 Gabers is almost 4 months old and he's getting cuter by the minute. Since we haven't had his 4 mn. check-up yet, I don't know his current stats, but I do know he's officially too big for anything 0-3 months and is wearing 6-12 month stuff. He's not as chunk-a-licious as his buddy Jaren, but I think his thighs are satisfyingly squishy and he has a double chin when he looks down. (That's if you count his first chin as a chin cause it's not much of a chin. Doug keeps saying something about a missing mandible?) 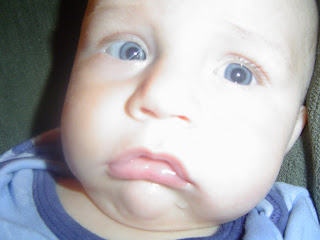 Anyway, he's really freakishly adorable. He sleeps through the night, usually from 9-6 without interruption, he can role from his tummy to back, (he arches his back and just tips) he can almost fit his whole fist in his mouth, he does the back stroke in the tub, and he's picked up spanish. (He must be listening when the boys watch Dora.) 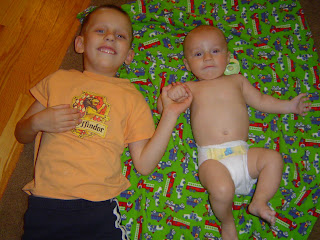 Most people think he looks exactly like a Mini-Max and he does. The cute brown hair he was born with has all fallen out and been replaced by blond fuzz. His first plane ride is coming up and he'll be getting his first taste of his future home...CARLSBAD. I'm sure he'll love it. Now to torture you with his cuteness, I'll leave you with this:

cute baby boy! I am a friend of doug's back from high school.

your friend Jen, has amazing pictures. I checked out her blog. thanks for sharing.

So cute! Ric has a cousin who lives in Carlsbad - we visited a year ago in March. We loved it - beautiful place! (Though there was one night where we had quarter-size hail...I'm sure that doesn't happen very often!)

Have a fun trip!

Emily! Hope you look me up when you are here....... if not no hard feelings :) Know how hard it is to fit everything & everyone into a vacation. Have fun & travel safe.

Awww, Gabe is so cute! He is a mini-max! Have fun in Carlsbad! Are you going next week (did I read that right?) Have a great time!

I can't believe how fast they grow. Basil is giggling when the dog walks by. I love it!

He didn't sleep til 6 this morning!

do i know you?

thanks em for the pics and for the compliment:-) he is dang cute.

I'm INSANELY jealous that you are going to Carlsbad...

he is sooo cute em! He is getting so big, I love his cheeks. Have a wonderful time in Carlsbad and good luck on the airplane!

you're going to Carlsbad??? I'll be there this weekend!!! wish we could see you. You have a cute little guy!!

Mel and Jenn,
Let's get together!!! Claim Jumper anyone?

DUDE! That is just a freaky no-chin picture! Do you want some of Brandon's chin. He has some to spare!

Okay I'm a lurker here. You are such a clever writer! We started our married life in Southern California where my husband went to UCSD pre-med. Our last residence was in Oceanside where we managed apartments to scrape through undergrad. Anyhow, I wonder if our paths crossed down there? We attended wards in Point Loma on upward...great home turf to be from. Hope you don't mind the "visits" from me here in Kentucky-

And you're only allowed to move to Carlsbad if you come to my - what is sure to be excruciatingly long AND boring - graduation in four years.

And I feel like yyou put up that video just to spite me. Jk. I love you. Give him lots of kisses for me!