First you do the "Cash Call" commercials and now this. What kind of wrath have you unleashed upon Provo, you "Church Ball" producers!!!

(Thanks for the link Dave! I'm laughing my head off if you can't tell.) 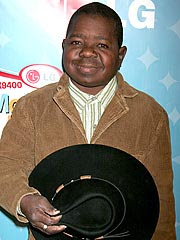 Gary Coleman was cited for disorderly conduct in Provo, Utah, following a public argument with a female companion last Friday. Passersby called the police when they noticed the diminutive actor getting upset and hitting the steering wheel of his vehicle while involved in a heated discussion with a woman, the Associated Press reports. He calmed down when the authorities arrived and was issued the misdemeanor citation. The woman was not identified. Coleman, 39, moved to the rural Utah town of Santaquin in 2005 when he started filming the movie Church Ball. He is best known for his role as Arnold Jackson on the '80s TV series Diff'rent Strokes. He also ran for governor of California in the 2003 recall election.

So here's the funniest thing. My parents live in Santaquin. Can you believe that Gary Coleman is now that sleep town's claim to fame? hehe

Shoot it all to heck... And I was gonna take the Fam down to Santaquin for the weekend. Now with that kind of conduct by it's citizens I guess we shouldn't. Maybe we'll dine out in Payson instead.

you've GOT to be kidding me!

I just love that our Provo City Finest have the time for citing a guy sitting IN A CAR having an argument.

He ran for governer? How did I not know this?