Do you know what I love? German pancakes. Why do I love them? I'll tell you. 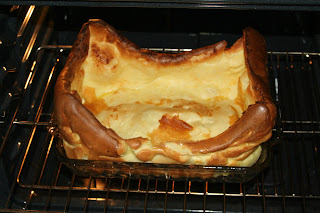 They're quick and easy to make

They're full of protein, (in case you're hypoglycemic and get cranky easily)

and they got a thumbs up for authenticity from a REAL GERMAN.

That's right ladies and gentlemen, my GERMAN roommate said she made similar GERMAN pancakes using the same recipe when she was growing up in GERMANY. (Did you catch the German-ness in there?)

"You had a REAL GERMAN ROOMMATE???" you ask in dismay.

"Why yes. A 76-year-old German roommate." I coolly reply and launch right into my story:


It all started in a little house on 9th East in Provo. I was trying desperately to break up with a boy I had been dating but was finding it very hard. He only lived a block away and kept coming over.

It was imperative that I leave the neighborhood as soon as possible. It took some convincing, but I finally talked my roommates, P.B. and Anna-Banana, into coming with me. Since a new semester was fast approaching, vacancies were scare. Especially three in the same apartment. And then I got lucky.

The Old Mill had an apartment with 4 private rooms all available. In it's hay-day, (the 70's?) The Old Mill was probably the hippest place to live in Utah Valley. It had long since past it's prime when we found it, but still had a few features to recommend it.

For one, each apartment offers four private rooms, and each room has it's own private toilet and vanity area. There are also two indoor pools in the complex complete with Jacuzzis. Oh, and of course, lots of single guys!

Anyway, the three of us took three of the available rooms and hoped the fourth would remain empty. After all, who would want to move in alone with three extremely tight friends?

Unfortunately, someone did. It was with great sadness that a month or so after we had settled in, our manager--a girl our age--left a message saying the last room was filled. It had been rented by a man living in Orem for his 75 year old mother.

Her: "Yeah, like, her son called me and I, like, thought it was for his daughter but he wanted it for his mother."

Me: "WHAT? ARE YOU FREAKING KIDDING ME?"

Her: "Uh...no. I assumed the guy wanted it for his daughter...turns out it was for his mom."

Me: "They can't do this! This is STUDENT HOUSING! You HAVE to be a STUDENT!!!"

Her: "She is a student. She's taking a Book of Mormon class at BYU."

Now for the collective reaction of Michelle, Anna and I:

The Five Stages of Grief:

Denial (this isn't happening to me!)
Anger (why is this happening to me?)
Bargaining (I promise I'll be a better person if...you don't give me a 75 year old roommate)
Depression (I don't care anymore)
Acceptance (I'm ready for whatever comes)

Only we probably skipped stage five.

So here we were, faced with the unthinkable. We imagined parties cancelled, boys booted, and every other horror that could be inflicted by a stringent old German woman. They say the best offense is a good defense... (I think someone says that...no clue why) so we prepared for her arrival by making inappropriate signs and hanging them all over. (To scare her off I suppose?) I remember one in particular that Anna made. It said "Eh! to big breasts!"

Then the day of her arrival...well, arrived. The three of us sat in the living room waiting sulkily. There was a knock at the door and I got up to open it.

When I opened the door I saw a tiny, shriveled little woman with dyed blond hair and thick Coke bottle glasses staring up at me. I couldn't help it. I was in complete shock. I started smiling as I said "You must be Ursula!" and I gave her a big hug. She was the cutest little German woman I'd ever seen. She replied looking up at me, "Oh! Sank you! I vas so vorried!!!"

As it turns out, Ursula was the ideal roommate. She went to the temple everyday and attended religion classes at BYU. She said she'd had enough cooking in her life, so she ate out for all her meals. When she was home, she stayed in her room studying. When we apologized for being too loud she'd say "Oh! I didn't hee-ah! I vas doing my studies vith my headphones!"

It even turned out to be a boon to our social lives! Guys thought it was fascinating and wanted to come over to see for themselves! (One particular boy didn't believe us so he marched down the hall and opened her door...despite our protests. He saw Ursula sitting on her bed with huge headphones on, slammed the door and ran back down the hall in complete shock. What a dummie.)

So, that is how it came to be that one night Michelle, and I were sitting down at the table for a dinner of German Pancakes when Ursula came in. We begged her to join us for dinner (she always turned down our invitations to socialize) and I told her what I had made. She tried a tiny slice, asked the ingredients, and said, "Yes. Theese iz just like I had vhen I vas a girl!"

And there you have it. Why I LOVE German pancakes.

you had me at breakfast.

Awww, what a fun story! Those sound yummy!

I'm not making this up, I swear! But I was just planning our dinner in my head and German pancakes were going to be the main course for all the great reasons you listed. Kinda freaky, huh? I guess great minds really DO think alike.

I love, love, LOVE German pancakes, and I never make them. Why? I don't really know. Partly because we never have time to make breakfast these days... but now I want to. Maybe for dinner. And that is about the funniest story I've read in a while. Hilarious. I love your blog! Tell the fam hello from all of us here in SF!

BTW - can you give me the recipe? Please?

let's have some when i come!! and those evilshkevers hhahah or whatever they're called/ however they're spelled XD. so excited to see you!

This story ranks as one of my favorite Emily stories. Although watching you try to reinact the "gymnastics incident" made me appreciate that story a lot more. Did I ever tell you my grandpa was born in Germany AND his name was Ludwig? He never made me any stinkin' pancakes though.

I just have to say that reading your blog is a definate blow to my self-esteem. First the perfect birthday cake and now the perfect german pancakes!! Not to mention a host of other flawless food you have prepared. My German pancakes look like regular pancakes...only flatter. And the cake I made on Sunday without any eggs, it was a treasure!

These are the best...we call them Baby Dutch! I love your stories!!

Click on "German Pancakes" in the first line for the recipe!
:)

Wahine,
Your superior brain power and musical genius more than compensate for your lack of cooking prowess. Also, cake without eggs can be good. See the second post on my new recipe blog: gratuitousrecipes.blogspot.com

I just made your german pancakes!! Weirdest thing i've ever made but it was good-- even posted a picture on my blog! Even the kids liked watching it grow and trying it out. Thanks for the recipe.

Just made the german pancake. DELISH! Thanks for the recipe! Even thinking about making it for dinner tonight for my hubby

That is an adorable story! And German Over Pancakes have been a Sunday breakfast tradition in our family for years! I am a random blogger linker.

You know don't you that I get all the credit for German pancakes being a part of your life right?!? I learned how to make them in Home Ec. at Butler Middle School and came home and made them for the fam. I still have the original recipe I copied. So, there's one more thing you are eternally indebted to me for!