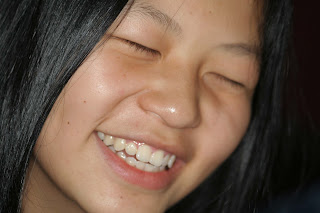 I'm visiting Ms. Emy and the boys here in Rhode Island. She is nursing Baby-beautiful at the moment, and the while original plan was for me to blog Emy things for her because she doesn't post enough, she has asked me to introduce myself instead. And she's going to write her shtuff bout' me later. Also, in the interest of having more enteries come up when I search my name on her blog, I'm going to force Emily to make her entry seperate from mine. =)

[And I know Adriane, who must be reading this, is already working on more entries about me for the same reason!]

So, my name is Shelly. I like any color that isn't an ugly shade. I love Dougy&Em's boys. I hate pickles. But enough about me.

Weather: hasn't been kind. I arrived early this Wednesday, and it has been mug-gy from the moment I stepped off the plane.

---leaving for an adventure with Maxer---

I'm back. We went to the beach. I tried to get the name of beach, but it didn't go well. It was pretty intense. Like Indiana Jones at the age of 5 style.

S: What's the name of the beach?
E: I don't know that it has a name.
S: Okay, I was going to say, I'm very disappointed that you don't know the name - because in California, you know that names of all the beaches you go to.
E: Well... I'm not so sure it's a public beach for like, people to-
S: Don't make excuses for this state.

Anyways, we had a big adventure, and climbed lots of rocks - I wasn't too thrilled about that, but hey, what can you do? When a beautiful little boy that you love asks you to do something, it's a hard to say no!

Back to the point. Emily has pimped out my room with everything I could possibly want. And her waffles are awesome. I've eaten so many, that I'm very large now. Okay, pretty much ready for nap time now.

Until next time,
Shelly

Shelly is from San Francisco. Shelly is 14 years old.
Shelly is Asian (and has dubbed us honorary Asians despite the fact we put our soy sauce in the fridge.)
Shelly didn't write enough about herself.

Nice to meet you Shelly!

i don't know shelly or why she is at your house. but i am jealous cuz i want come hang out with you and eat waffles.

But you used capital letters. You aren't the REAL Shelly.