Finally! A Celebrity I Can Respect!!! 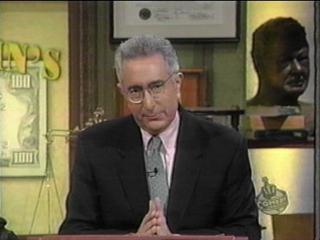 "Confessions for the Holidays"

CHARLES OSGOOD, host: We all have our own thoughts about the holidays. Here's Ben Stein with his.

BEN STEIN: Here at this happy time of year, a few confessions from my beating heart. I have no freaking clue who Nick and Jessica are.

STEIN: I see them on the cover of People and Us constantly when I'm buying my dog biscuits. I still don't know. I often ask the checkers at the grocery stores who they are. They don't know who Nick and Jessica are, either. Who are they? Will it change my life if I know who they are and why they've broken up? Why are they so darned important?

STEIN: I don't know who Lindsay Lohan is either, and I don't care at all about Tom Cruise's baby.

STEIN: Am I going to be called before a Senate committee and asked if I'm a subversive? Maybe. But I just have no clue who Nick and Jessica are. Is this what it means to be no longer young? Hm, not so bad.

Next confession: I am a Jew and every single one of my ancestors was Jewish, and it does not bother me even a little bit when people call those beautifully lit-up, bejeweled trees Christmas trees.

STEIN: I don't feel threatened. I don't feel discriminated against. That's what they are — Christmas trees. It doesn't bother me a bit when people say 'Merry Christmas' to me. I don't think they're slighting me or getting ready to put me in a ghetto. In fact, I kind of like it. I shows that we're all brothers and sisters celebrating this happy time of year.
It doesn't bother me one bit that there's a manger scene on display at a key intersection at my beach house in Malibu.

Mr. Stein currently offers occasional commentaries for the CBS Sunday Morning news program, and the item quoted above is based on one such commentary, entitled "Confessions for the Holidays" and delivered by Mr. Stein on that program on 18 December 2005, one week before Christmas. However, the version widely circulated via e-mail includes some transcription errors and modifications that were not part of the piece as originally aired. Here is the full version as broadcast, taken from a CBS News transcript of the program:

Stein, a lawyer by training, has also served as a speechwriter for President Richard M. Nixon, has to date authored sixteen books (both novels and non-fiction efforts), and continues to write editorials and columns for a number of prominent publications. He is perhaps best known to the world at large, however, for his in-front-of-the-camera work as the dreadfully dull economics teacher in the film Ferris Bueller's Day Off (and his similar role as the monotonic science teacher Mr. Cantwell on the TV series The Wonder Years) and as the keenly competitive host of the Comedy Central game show Win Ben Stein's Money.

Sweet...said just how I would like to say it!

Well said. Let there be peace on earth and let it begin with me. Gee, could you sing that for us Em? It should be a song.

Yeah, he gets to be my new hero.