We Bought a House!!! 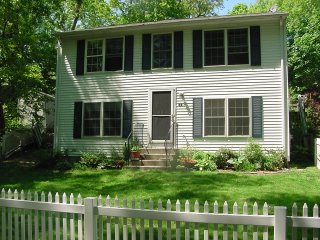 After months of on-line shopping, a plethora of e-mailed listings from our realtor, and one quick trip to New England, (by myself) we've finally found a home and are in the process of buying it! (It's the white one)

A few days ago we made an offer, which the owners abruptly countered, after which we (in a more leisurely fashion) countered their counter which they immediately/finally accepted!!!!!

We're very excited because it is a newer home (only 9 years old) in a great school district, with a big yard, surrounded by millions of trees and has only one neighbor. (Not including the airport and train tracks which at least the boys will appreciate being close to.)

Doug is already scheming how he'll landscape the yard 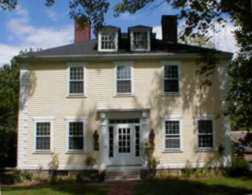 and I'm planning to add some (very simple--yeah, right) architectural interest to the exterior with molding around the door and windows, and possibly a different front porch. See the yellow house. (Did I say "I'm planning to add?" I meant I'm planning to have DOUG add... Does anyone know how to build a chimney or two?)

Of course, we're both living in fantasy land because once we get there we'll probably have no time and no money. But what the heck--it's fun daydreaming about it.

Max gets slightly excited about the move when we remind him they have snow. (He'll probably be pretty ticked when we get there in mid-June, but we'll worry about that later.) We've showed him pictures of the new house, but his only comment on it was "OHH!!! I wanted the one with the swimming cool!!!" (Yes, cool...not a typo.) 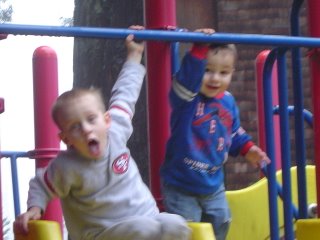 I told him we could get a plastic one and he was happy once more. (Kids have relatively simple needs once you scale them down a bit.)

Speaking of being simple, one day while I was diligently hunting for a home, Doug called to tell me he was on his way to a Sporting Goods store in the mall that's going out of business. I asked him why and he said "to buy a bounce house!" Huh? A what? and WHY? Turns out, they were on sale and the neighbor two doors down had already snapped his up so Doug and a THIRD student father, were racing to the mall in an attempt to keep up with the Browns. We now have a NIB, million pound bounce house sitting by the front door.
See my e-bay auction for more details. 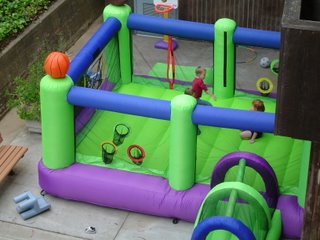 Well, it's almost exactly one month until graduation and then we're flying back east the next day. Our stuff will already be in route and will get there a few days after us. We'll have one week together in the new house and then Doug is off to Brooklyn for three weeks of training. Hopefully I'll be able to visit but although I consider myself pretty adventurous, I don't know if I want to explore New York City alone, on-foot, with two crazy boys in tow. It's mostly that last thing that intimidates me. We'll see what happens.

In the mean time, anyone is welcome to visit our new home and help us explore New England!

Can I be your indentured servant?

welcome to blogdom! your writing is so witty that i'm sure to be a faithful reader. (and i totally understand keeping a secret blog --mine was underground for a good month, as well.) keep up the good stuff, pictures of the munchkins .. and congrats on your new pad! (yes, i was referring to the bounce pad, not your house :)