Blogging is on its way out.  Have you noticed?  People who have been blogging for years have given up their blogs because, well...because no one is reading anymore.  Or because they can record/express/share the same thoughts more quickly and efficiently via Pinterest/Instagram/Facebook.  (All of which I love and usually check daily.  On my phone.)

Even my blog has taken a drastic downward turn since we moved here because...
1.  I started homeschooling.
2.  Last year sorta sucked what with starting a bleeping dental practice and all.
3.  I got an i-Phone --which allows me to do computer stuff without actually sitting down at the computer--but it is not conducive to blogging.
(At least not to a texting novice like me who was cell-phone-less for 3 years in Japan and therefore has poor thumb-muscle-tone.)
4.  And did I mention Pinterest?  Why blog when there is soooo much to be discovered on Pinterest!?!?!?  Recipes!  Dream Home Ideas!  Cool Tatoo Ideas! Super Cute Pictures of Baby Animals!!!!

So yeah.  Where does that leave us?  With fewer blogs.

But then the other day I had an epiphany.  We were in church discussing...
something.
Don't remember.  My mind was probably wandering.  But all of the sudden I realized that blogging is a totally worthy and worthwhile Sunday activity!!!  (Actually, I'm sure I've had this thought before...so it wasn't much of an epiphany as epiphanies go.)  (Epiphanies?  Epiphany's?  Epiphani?)

Which led me to my next thought that, unlike so many of my other on-line activities, blogging (at least WRITING a blog post) is never, ever a waste of time.  (Even on non-Sunday's.)

--->Afterall, I don't write in a journal except on very rare occasions.
--->I gave up Scrapbooking when Max was big enough to climb up on top of the table and destroy hours of effort.  (He was about 16 months old.)
--->Nowadays, I don't even write on a physical calendar (which I used to do religiously noting every activity our family ever did).  Now I just put everything on my phone.

Therefore, if I ever hope to have any record or memory of my life, for myself or for my kids, it will come from my blog.  This stupid blog.

And therefore, I can't give it up.  And now that three of my kids are back in school, I'm going to try to do it more.  And I'm not going to be sad that few people read and even fewer comment.  Because that's not the point.  (Even though I really, really, really like comments.)

So I'm back.
And recommitted.


I'm going to imagine all three of you cheering now.

Thanks for that.  See you again soon!
18 comments:

First Day of School and the Rest of My Life

You probably think this is just another average picture filled "Look-at-my-kids-first-day-of-school-in-their-cute-new-outfits!!!" post.  But it's a lot more than that.  Because it wasn't just my kids first day of school.  It was also the first day of the rest of my life. 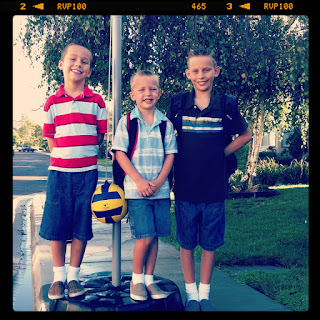 Why?  Because when school started THREE, yes THREE of my children left the house and didn't come back for multiple hours.

Let's just take a look back on what my life has looked like in the past twoish years:

March 2011:  Max and Sam are both in school full time, Gabe is in preschool three days a week, giving me 9 hours a week of just me and Gray time.  Life is good.

Then the 3/11/11 earthquake happens.
Gabe's preschool is cancelled permanently due to most of the staff fleeing the country.

Max and Sam fall behind because the school stops teaching and focuses solely on treating post traumatic stress in all of the kids.  The school year ends, and we move from Japan to California.

August 2011:
Max and Sam go back to school full time, but we've just moved and we're broke so I keep Gabe at home with Gray rather than pay for preschool.  Two boys at home, two boys in school.

By October I've pulled Max out of 4th grade to homeschool him and hopefully get him caught up.
So, for those not keeping up, I have three boys home with me all day, and one at school.

June 2012, school is out, and Sam is home with me full time.  With Max, Gabe and Gray.
Four boys, home with me, all day every day.

We survive the summer, but just barely.  (JUST BARELY!!!)

And BAM!  Life is good again!

Now, don't get me wrong...I love my kids.  I love them a whole heck of a lot.  But if you've met them, you know they're a little high maintenance.  They're super cute.
They're also super hyper, loud, and messy.
And when I say hyper, loud, and messy, what I really mean is SUPER DUPER INCREDIBLY HYPER, LOUD, MESSY, AND VIOLENT!!!

Sorry to yell, but I'm trying to make a point here.  Did I mention they like to wrestle?  Well they do.  They like to jump on the couches, throw pillows and body slam each other repeatedly.  And that's WHILE watching T.V.
(Ya know that thing that usually keeps normal kids quiet and entertained for at least 20 minutes?  Yeah, not so at our house.)

They also like to tease each other.  You know that thing kids do when one kid is just sitting and reading quietly and then another kid has to just come and grab his book, lose the place, and start a really loud screaming fist fight?  Yeah, they do that a lot.

And that is why I've been breathing a big sigh of relief four days a week at 8a.m. when Aunt Laura comes to pick them up and drive them to school.

One day, I took a NAP when Gray took a nap!  (Just because I was tired!  For no other reason!)  And one day, I went to TARGET with only ONE KID and ran OTHER errands!  And then another day, I played with Gray UNINTERRUPTED and only made TWO SANDWICHES for lunch!  While listening to NO fighting!! 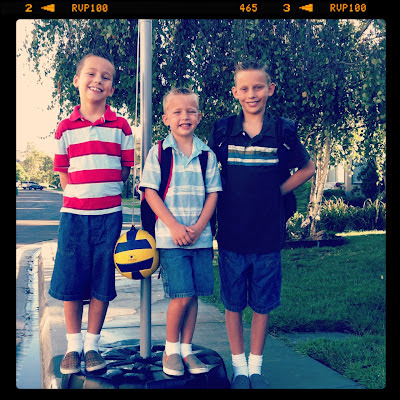 Life is good!
*Via Wikipedia:  Charter schools are primary or secondary schools that receive public money (and like other schools, may also receive private donations) but are not subject to some of the rules, regulations, and statutes that apply to other public schools in exchange for some type of accountability for producing certain results, which are set forth in each school's charter.[1] Charter schools are attended by choice.[2] While charter schools provide an alternative to other public schools, they are part of the public education system and are not allowed to charge tuition. Where enrollment in a charter school is oversubscribed, admission is frequently allocated by lottery-based admissions systems. However, the lottery is open to all students.[3] In a 2008 survey of United States charter schools, 59% of the schools reported that they had a waiting list, averaging 198 students.[4] Some charter schools provide a curriculum that specializes in a certain field—e.g., arts, mathematics, or vocational training. Others attempt to provide a better and more cost efficient general education than nearby non-charter public schools. Charter school students take state-mandated exams.[5]
4 comments: