Love in the Early Morning

It's almost 4 a.m.
Baby Gray and I have been up since 1:30. Which is actually great since I was expecting him to wake up at 2330.
In between feeding and changing and feeding and changing and burping and changing him...and gazing into his soulful eyes... I've been reminded of a few things I'd forgotten over the last three years:
*Babies poop every time they eat. (And they eat a lot.)
But sometimes they poop more than that.
Sometimes they eat and then poop and then poop again five minutes later.
And then again two minutes later...
...and then a little more while you're changing that third one. 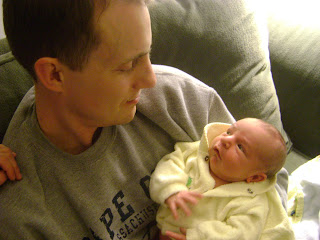 *Baby legs are strong! How are such tiny little legs so strong? I can barely control them to change his diaper! 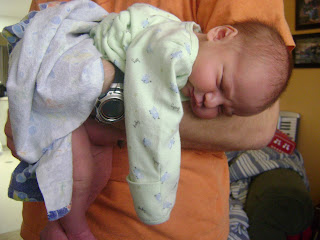 *Baby heels instinctively retract directly into any applied diaper cream, (and/or baby poo...) then spring back out spreading said diaper cream to opposite leg, jammies, mom's hands and dad's leather chair. (Yeah, so maybe I shoulda put a changing pad down. Sue me.)
*Diaper cream is extremely hard to remove. So is mustard poo. 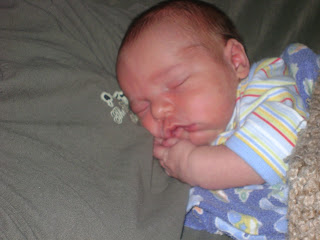 *Baby hands instinctively grab for their wettest, slimiest area once the diaper is removed...then proceed to spread said slime to stomach, face, mommy's arm, and dad's leather chair.
(Let up on the chair, will ya?)
*Baby boys in little baby boy nightie/sleep sacks are the cutest thing EVER!!!
*Happy, clean, full-bellied, heavenly-smelling babies staring intently up at your face...
...even at 4 am...
are worth it. 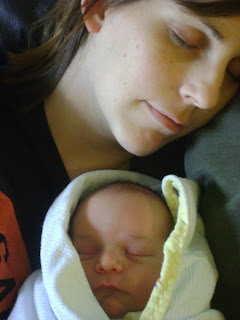 P.S. One day I'll put make-up on again before having my picture taken...but not today.

Email ThisBlogThis!Share to TwitterShare to FacebookShare to Pinterest
Labels: Grayson

Ahh, the joys of having a newborn! It almost makes me wish for another, but then I remember why I don't and I'm happy. He's beautiful, and I'm glad you are getting to have so much fun with him!

I love them in sleepsacks too, can't wait for that again! He is precious!

Eeeeeee! So cute. Congrats and I love the name. His mouth? I die! So wonderful.

That's a picture you can frame and put in Grayson's bedroom. Beautiful. You don't need make up!!
I hope it will get better soon with all the feedings at night:(

Totally worth it! He is so cute! Love those Cherib cheeks!

HAHAHAHAHAHA! because our babies are just a week or so apart I'm totally agreeing with and laughing about everything in your post. Aidan is 4 1/2 and I REALLY forgot about all of those things. and they are so true! good luck Em, he's a sweet angel.

oh, and camden has a new email which is why this looks like it's coming from him.

Sorta depressing to think that by the time I see this baby in person, he'll probably be WALKING! Stupid Japan. I wanna kiss him in the worst way!

Miss you Em and we have a box ready to send now AND even though it doesn't come with Caleb in it to watch the boys, at least we could send them some activities to do!!!

Good luck!!! Hope our newborn outfit fits that big baby by the time it gets to Japan!!!

How long do boxes take?

Congrats again and miss ya!!!