I May Have a Little Bit of a Problem...

I made a small purchase a few weeks ago.
The goods just came in the mail. 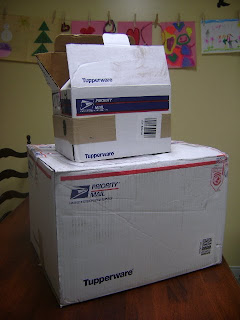 I don't know if you can tell the scale of this Box o' Tupperware, but it's half the size of my kitchen table.
Like I said, I may have a little bit of a problem.
When I told Doug I was going to buy some (more) "Modular Mates" to organize the cupboards and pantry he said "with what money?" (Typical response!) I said, "I'll fire Mamasan and use my pottery money!!!"
Yes, I really meant business. (But for the record, Mamasan was losing her luster a bit. She had stopped deep cleaning and started doing mostly laundry and putting it all away in the wrong place. Which is, shockingly, not very helpful. And for the OTHER record, Modular Mates were 40% off at the time of my purchase!!!)
So Mamasan has been let go, and I'm in debt. For Tupperware. And since I make so stinkin' much money teaching pottery, it'll only take me like say...three months to get out of the hole.
Doug is not sure what to make of me. But then I reminded him of my last large purchase of Tupperware Modular Mates: I was about 7 months pregnant. With Gabe. 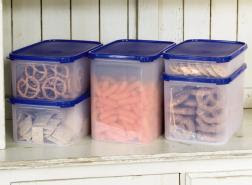 (Just for the record, my large rectangle Modular Mates will NOT be filled with Cheesy Puffs or Pretzels.
Think whole grains! Totally worthy purchase, right?!?!?!)
I'm going to blame it on nesting. (One more reason in favor of adopting the next one!)
And that is all I'm going to say about THAT!
I have some organizing to do.

Ha ha ha. I love this post. I am laughing at how big that box is. It must have cost as much as the crapperware inside just to ship it. If I could get away with it I would have bought it too. Enjoy organizing...you know I do..Loves.

Anna, when I finish my pantry make-over, I'll post a picture just for you!!!!

I can't wait to see the organizing pictures. I bought baskets for my pantry recently - now to make my children leave Mummy alone so she can blissfully deep clean and organize the pantries..... heh heh

I have never heard of those "mates".
And I am glad you figured out how to explain mamasan she is fired:)

I can't wait to see them all put away and organized...and paid off! I'm glad that means you are holding up your deal of not buying anything else, especially why I am in Thailand.