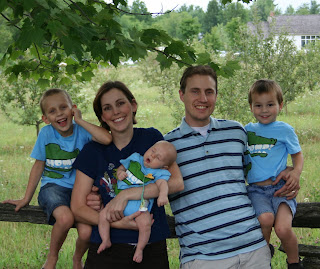 Alright, I was writing this post really late at night and didn't use spell check. (You've got to give me credit for getting Kleptomaniac right on the first try...!) (Of course, spell check wouldn't have caught the birthday error...) So anyway, here's the corrected version:

So Shelly is in town and we're having a blast. She is one of our favorite Young Women from San Francisco and we love having her here.

While she's here, we're teaching her valuable life lessons like how to braise chicken and make homemade ice cream. She's trying to teach us how to be more Asian. For example: did you know chopsticks can be used to remove waffles from the waffle maker? (I had no idea!) AND, (and I believe I've mentioned this before) Soy Sauce does NOT need to be refrigerate no matter what it says on the bottle!

Not only does she know all sorts of clever uses for chopsticks, but she also makes the boys very happy. She's been helping me out a lot and helping to keep them entertained. What a gal! Oh, AND she let Doug and I go on a date the other night. SWEET!!! (I almost said "SCORE!" but it wasn't that kind of date.)

She's made us all Face Book accounts (so we can be cool) and she and Doug sit around in the evenings customizing their accounts, watching funny videos on YouTube and being generally geeky.

Now for the Max update. When Doug finally made it home at a reasonable hour, (it took a few days) we sat Max down together to have a talk about the car incident. We told him he'd have to give it back and use his own money to buy one more to give to the school as well. He took it like a man and there were hugs all around.

I know it may seem as if I over-reacted, and I did, but I was mostly just shocked that he hid if from me for so long. BUT, after careful reflection and contemplation, I've decided he's NOT destined to be a sociopathic Kleptomaniac so I'm over it. He just better not do it again. He IS after all, an extremely sweet kid and a GREAT older brother.

As for the rest of the fam, Sammers is still an adorable bi-polar punk but we're hoping the "bi-polar" part will evaporate on his third birthday on Tuesday. (Just make his birthday checks payable to me.) He loves to play Cars, trains, and swords. He can go from ecstatic to devastated and back again in 2.5 seconds. Obviously, a very talented kid.

Gabriel, of course, is still an angel. An angel who spit-up three quarts of fluid all over me and every pillow on my bed the other morning...but an angel nonetheless. To redeem himself, he slept for 10 hours that night...in a row....without waking once. (All praise goes to "Babywise" so knock it all you want, but don't forget the 10 hours part.)
He's basically a perfect baby. (I can brag all I want. I've done my time with uncooperative tyrants.)

As for myself, I'm on a strict daily ice-cream diet. To keep my milk supply up, of course. It seems to be working just fine. Strangly though, it hasn't help with my weight loss. hmmm.

for the record, i've never knocked babywise. i was just too emotionally weak for its standards after a few months. then again, miss dub did not sleep 10 hours at night at my babywisest. that would have been a motivator! hurray for G-funk!

Mrs Dub, don't worry...I wasn't thinking of you when I made that comment. I know Babywise doesn't work for everyone and I take all the advice with a grain of salt. (Moderation in all things...even Babywise.)

I was actually directing that comment to a complete stranger who doesn't even read my blog because she wrote a post basically comparing Babywise to child abuse and Gary Ezzo to Satan. And I was shocked and dismayed to find how many people really really hate it.

Lesson #1 from Shelly should be learning to correctly spell the word ASIAN!! Sorry I have to be mean to you right now because of my jealousy over Gabe's sleeping habits. Jaren is seriously regressing. GRRRRR! We found a cool new beach spot,... we'll have to go once our houseguests are gone.

Pout... I am really jealous! Andrew hasn't slept that long ever (he doesn't evem really sleep during the day). Oh, well. Maybe soon...

Bartimaeus said...
This comment has been removed by the author.
9:49 AM

My four year old still gets up in the night!! How nice to have a sleeping baby! Your family is very cute Emily!! Miss ya

Weight loss???? You're already thin!! (And have a darling family. Love the new picture).

Chopsticks can be used for EVERYthing.