One way or another, it's all about dressing up.

It was my freshman year of college and I was living at The Glenwood in Provo. As Valentines Day approached, my friends and roommates and I contemplated what do do in our boyfriend-less state.

I'm pretty sure it was Christina who made the suggestion the day before V-day. A friend of Malia, (Or was she a friend of Joanna?) I envied her petiteness and the fact that she could pull-off white blonde hair in a pixie cut with funky glasses. Anyway, she suggested we hold a Halloween Party...the very antithesis of the gooey/lovey/hearty-farty affairs planned by many of our more lucky-in-love neighbors.

We agreed immediately and plans (and phone-calls) were made. First, we had to decide on costumes. Luckily, my closet was filled with thrift-store finds including a vintage lace old lady dress with matching shoes (my costume), a florescent green disco dress with matching hooker boots (worn by Rama) and various polyester work shirts with patches baring names like Steve and Ric. (Worn by other roommates.) Once arrangements were made and costumes settled on, we decided we need to increase the number of invited guests. 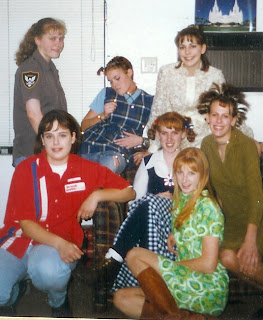 Now, The Glenwood was layed out with all the guys apartments on one side, and all the girls apartments on the other. We, of course, went immediately to the guys apartments and started knocking on doors of complete strangers. The guys who had plans were getting ready to leave or were already gone, but we were surprised to find so many stragglers. Guys with no dates, sitting around either alone or with a roommate, watching t.v. in the dark.

We burst into their apartments and invited them to the party starting in only an hour.

Malia's costume was a string Christmas lights and after Ang and I gave our pitch, she'd ask politely, "Mind if I light up?" and proceed to plug herself into the nearest outlet. A lot of total strangers showed up that night. One guy even called the next day to thank us for inviting him.


For me the highlight was when the Accordian Player showed up to serenade the party with love songs. He'd been hired as a singing telegram and since the recipeint was at the party, he was redirected to our apartment. I don't remember many of the details after that, but I know the party was a success. It became a tradition and for the next few years. While I had roommates, we had a Halloween Party to celebrate Valentines Day. 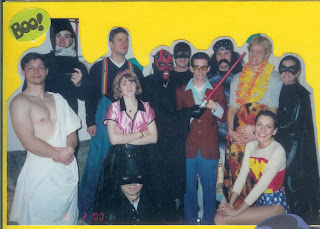 (This was one held at the Old Mill and hosted by Anna, Michelle and I. We invited the pizza delivery guy and he came back and joined us after getting off work.)


I have to admit, I do miss those Halloween parties but I'm pretty happy with the upgrade. I love having a perma-Valentine. Afterall, I got delicious French Toast in bed this morning (with vanilla ice cream, syrup, strawberries, apple sauce and spray whip all in little custard cups on the side.)

Tonight for dinner it'll be my turn to cook and I'm going to make Four Cheese Pasta, French Bread, and something gooey and chocolatey for dessert. But of course, not everyone has a significant other to help them celebrate the holiday of all things heart shaped. If that's the case, I highly recommend you consider Halloween as an alternative. Because after chocolate truffles, the next best treat in the world is Candy Corn!

Email ThisBlogThis!Share to TwitterShare to FacebookShare to Pinterest
Labels: Halloween, I got out my college scrapbook again, Valentines Day

Totally funny! I love it! Has Doug seen you in that Wonder Woman costume? Oh la la :)

Thanks for the great Valentines Day Em! I love you lots. Now go put on that costume again!!!!

Holy Moly Emily! Wonder Woman!!! You are scandalous! I have such a good time reading your blog. Must be cause "you're so deep and insightful". When are you guys going to South Africa? You're boys are cute as ever! Happy Birthday! and hello the rest of the Dubs :-) love, kayla

Um...those legs of yours go on forever.

I don't know how I managed it, but the hooker boots are in my garage as we speak!

All I can so is we were HOT chicks. No wonder Travis married me. Put me in a black cat suit and who can resist. I just should have done it three years earlier. I forgot how much fun those parties were. I totally forgot about the accordion player. Didn't you go out on a date with him?

Wahine, As long as you're wearing the boots fort-nightly, you can keep them as long as you want. But they really should be in your closet...

Anna-Banana, I did NOT go on a date with the accordian player. I have SOME standards! I never saw him again after that night! And you were (and are) one hot mama! Travis/Pregnant Luau Dancer is lucky to have you!!!

oh yes, some of the best times...we were such hot chics!!!

Nice! You gotta love the college scrapbook! I do hope you wore the costume for Valentine's Day!

Wow, look at those legs! You go girl!

I hear you have a tattoo on your "butt"! Nice costume. Emmy

You are one HOT wonder woman!!

Emily, sometimes I think you're too hot to be a mom.