When Someone You Love Gets a Terminal Illness

"Marie G. A. You are one of the best, most human and funniest writers I have read, and I have read a lot - no answers for you - just not to give up, while they're yelling at you, inside they know you are right and you love them, but they're a mess. Teenagers' brains don't function real well in some lobes which I forget, gets better by 20's. Your mom is sympathizing every minute, and staying close."

First of all, that was a really nice compliment. Secondly, Marie is super funny. Thirdly, reminding me that my mom is on the other side helping me, made me a little teary.

Which was pretty heartbreaking.

And, of course, got me thinking of my Mom dying.
Which sucked and still sucks.

{Or as her daughter aptly put it at Marie's funeral: "Cancer sucks balls!!!" Which made me chuckle inwardly. (Bouncy balls, obviously.)}

Quite frankly, my mom dying is something I never stop thinking about.

See, I have all these mild to moderate regrets. Most of all, I just regret that I didn't bleed her for information every minute of every day.

Here are some questions I would ask her if I could talk to her right now. (There are about a billion more where these came from.)

What was it like when Karie turned 13 and you had your first teenager? What did you worry about? What was unexpected? Did you feel like you had any leverage or control of the situation at all, or did you feel completely crazy-train and powerless like me?

How do you get the meringue not to bleed on the Peanut Butter Pie?

What was the first book you remember reading as a kid and what did you like to read growing up? And as an adult?

What was your favorite type of ethnic food? (I already know it's Mexican, just want to hear you say it.) Second favorite?

Tell me about all of your very best friends.

What age did you get breast cancer the first time? My OB really wants to know.

How did you find the lump again...? I can't remember the story. I know it has to do with your best friend Maureen getting breast cancer at the same time. Can you tell me the story again?

How did you keep the house clean when we were little?

How did you fill your time when I went to school? 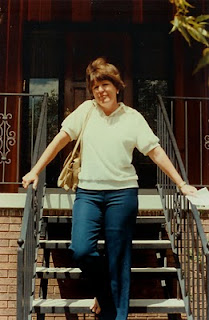 Do you regret not working in illustration longer?

How did you stay motivated to cook those big dinners for us every night?
(Alternately, did you know when it was just the two of us and we had "cereal night" or those tiny thin-cut fried pork chops that those are really happy memories for me?)

And how did you get yourself up to make us breakfast every morning when you had six young kids?

What was the best trip you ever took and what was your favorite country? 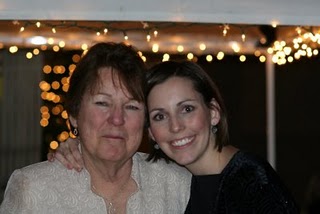 If the situation were to repeat itself, I would be more prepared.

I would have gotten her to plan her funeral.
Who she wanted to speak-- and sing-- and which hymns were her favorites?

{Did you know my siblings fought while planning her funeral?
Well, now everyone knows.
Yep, we fought.
It wasn't pretty.
It was pretty ugly.
We're all strong-willed and opinionated and we were stressed and shattered.
No one should have to fight over the hymn you sing at your mothers funeral. Your mother should have that written down.}

What about legal and financial records? Where are they? What do I need to know?
---
I regret not recording her more.

Sure, maybe it's technically illegal and very NSA-esque, but why didn't I record every phone call I ever made to her? Why didn't I sit down and press record every single time we saw each other in person. I recorded her singing a few songs, but why didn't I record her SINGING EVERY SINGLE SONG EVER WRITTEN?!?! Or at least every song ever written or sung by Anne Murray. That probably would have sufficed. She loved Anne Murray and they have the same vocal range. 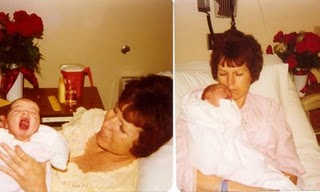 I regret that I didn't find ways for her to put her handprint on more tangible items. I did try to get her to make my unborn baby a quilt, but by that time, it was too late. Turns out when you're dying you don't necessarily feel up to quilting. But now every scrap of paper with her handwriting, every note, every recipe card, every photograph is a treasure.

{Sidenote: A few weeks ago I was cleaning out Max's room. I found Grandpa Warners old non-functioning "Nook" electronic reader. (the Barnes and Noble version of a Kindle.) I asked Max if we could recycle it. He said no. All of the sudden I had a flash of understanding. He wasn't keeping it hoping to get it fixed and use it. He was keeping it because it belonged to his Grandpa. A useless electronic brick and he didn't want to give it up. I told him, "This isn't how you remember Grandpa. You have his (neck) ties for that. You can let this go." And he did.}

Now when I hear that someone has terminal cancer, first, I feel horribly sad for what they are all about to go through. Next, I send some prayers their way. And finally, I want to go to their children and yell in their faces: "RECORD EVERYTHING! PHOTOGRAPH EVERYTHING! TAKE A MILLION PICTURES! ASK A MILLION QUESTIONS! HAVE THEM PLAN THE FUNERAL!!!!!!!"

But I don't.
And if I did, the person being yelled at probably wouldn't listen.
(Aside from being annoyed at the yelling.)
Because maybe they will get better!
And because it's awkward.
And uncomfortable.
And sometimes even if you do bring up funeral arrangements, maybe the person doesn't want to talk about it or think about it or deal with it.

I don't blame them.

But maybe you can show them this post written by a woman whose heart broke into a million pieces when her mom died and now treasures a note written in the front of a cookbook: "Emily, you'll do just great! Love, Mom" 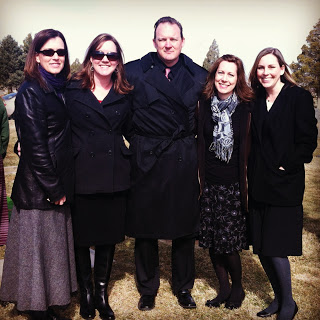 And maybe they'll be motivated to fill out one of those cheesy "Tell Me Your Story" books you can find on Amazon.
Or make a recording reading a favorite book or singing a favorite song or lullaby.
Or pass on some hand-written recipes cards.
Or even just write a quick, handwritten note.

Maybe they wont. That's okay too.
But if they do, you'll be so glad they did!

Either way--you have my love and sympathy and all the universal good vibes I can muster and send your way!