All of these items could be their own post.  But I don't have that kind of time so take what you get and be happy about it!!!
*Sammy had a birthday and turned 5. 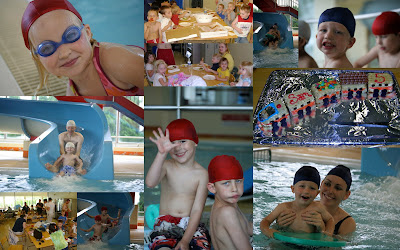 *Doug and I had a big fight but we made up.  And then we had our 9 year anniversary the next day.  Maybe I'll post about it one day.  (The anniversary--not the fight.  That would be like admitting we don't have a perfect marriage.  Which we do.  BTW, we fought on our 8 year anniversary too.  It's our new fun anniversary tradition.) *I'm supposed to be returning from hiking Mt. Fuji right now.  But I'm not.  (FORTUNATELY!!!)  Because I have bigger fish to fry/people to buy food for.
*I was called to be "Camp Food Coordinator" (or something) and I'm headed to church GIRL'S CAMP Tuesday morning.  (And the commissary is closed on Monday, and I can't shop on Sunday, so I had to shop on Saturday, which meant I couldn't hike Mt. Fuji.)  (FORTUNATELY!!!)
*Though I LOVE camping, I never really liked Girl's Camp as a 12-16 year old.  Too much drama.
*And frankly, I'm pretty sure I don't like camping with Morning Sickness, either.  (How's THAT for drama?!?)
*If you noticed I'm getting fatter and asked if I was pregnant...I forgive you.  ('Cause I am and I am.  But I didn't know it at the time...so nevermind...you're not forgiven.)
*Doug participated in his FIRST TRIATHALON on Saturday morning and did quite well.  Not that I would know as I was home sleeping and didn't arrive on scene until 40 minutes after he finished.  But I HEAR he did quite well.  Go Doug.  (But NO Doug.  You may NOT buy an expensive bike.) 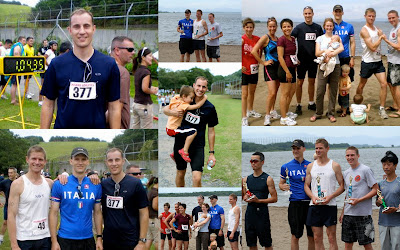 *I personally believe marathons and triathalons are for MASOCHISTS!  Yeah, you heard me every.single.female.friend I have!!!  Masochists and CRAZY PEOPLE!!!!!
*I (also) personally believe the only good reason to run is if you're being chased.  By a mugger.  (If I've said it once, I've said it 10,000 times!!!)
Well, that pretty much sums up the last two months.  Any questions?
19 comments: 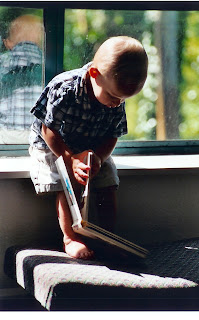 ...grew up!
Maxwell joined our family when we were still newly weds going to school and living in Provo, UT. 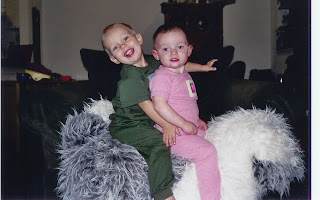 He turned us into an official family.  Sure, marrying Doug was great and all, but we were just playing house until this kid came along.  (And he made it so I didn't constantly stare at all the other babies at church on Sunday and comment to Doug how CUTE they were!!!) 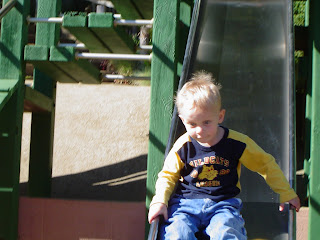 (People at church would stare at him and comment about is huge toothless, slobbery grin.)
He moved to San Francisco with us where we lived for four years, and then tagged along when we switched coasts and lived in Rhode Island for two. 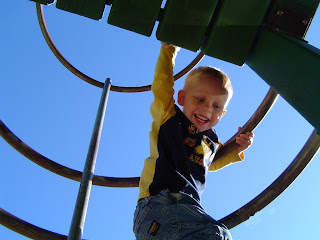 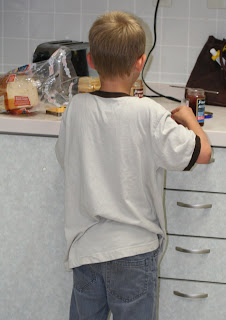 Not bad for an almost 8 year old!
And at some point...he went and grew. 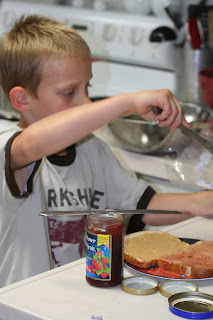 And stopped pulling stuffing out of pillows and sneaking Lucky Charms while I showered blissfully unaware. 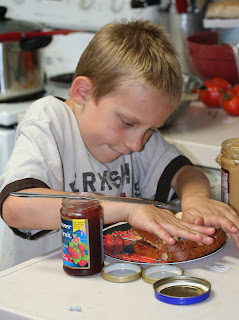 Now he makes his own sandwiches*.
Practices piano and writes in his journal. 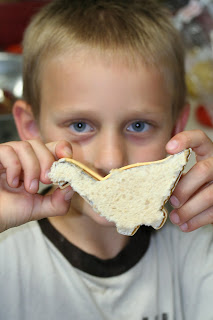 And begs for "reading time" with Mommy at night.
He even learned how to put a diaper on Gabe!  (But only to save himself from embarrassment and our family from a reputation as exhibitionists.  Too late!) 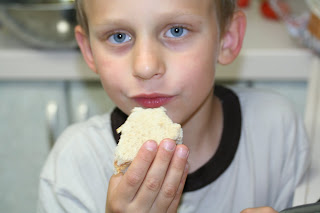 He's just an all around cool human being.
I Love you Max!  Thanks for being part of our family!!!

*Made with organic "Whole Oat" bread which Max loves because he considers it "white bread" which has been banished in this house since 1861.
2 comments:

Email ThisBlogThis!Share to TwitterShare to FacebookShare to Pinterest
Labels: Maxwell

When I was in High School, my mom would try to temper my sugar addiction by asking me;
"Now Emily, is that a good food choice?"
Translation: "Emily, if you eat that bowl of ice cream for breakfast you will be a cranky, raving, hypoglycemic mess by 9 a.m.  So maybe you should consider Oatmeal as a sensible alternative...!?!"
Well, sometimes I listened, and sometimes I didn't.  And I'm still trying to make "good food choices".  One small step we've taken is to try to buy things without High-Fructose Corn Syrup and/or MSG.
So seeing these two videos on another blog made me laugh and laugh!
4 comments:

I just found out my sis-in-law Chrissy is still in the hospital.  They found out what's wrong with her:  Aside from the collapsed lung full of fluid, she has 3 pulmonary embolisms.
NOT GOOD!
So please throw some prayers and good vibes her way!
This: 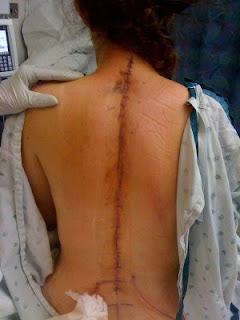 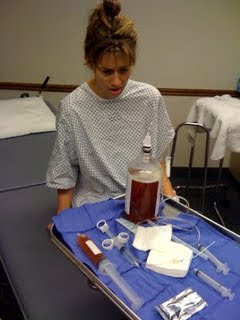 in her lungs!
Love you Chrissy!  Get better IMMEDIATELY!!!  I'm already planning your visit!!!
2 comments:

My brother stole my blog again.
AGAIN!!!
But before I knew anything about it, the post was taken down!  (Most likely by my sis-in-law who says she informed him "It's only funny the first time".)
Anyway, I got to read the removed post because it was still in my "Google Reader".
(Then I searched through my blog settings and removed "Brandoneous" as my blog 'administrator'.  (The AUDACITY!!!)  Silly me.  Can't believe I didn't look there before.)
So hopefully my blog is safe for a little while longer...again.  (A girl can dream, right?!)
(BTW, you will get zero delicious No-bake Cookies for your evil deeds, Brandon.  NONE!  You have to earn them through GOODNESS!)
Anyway, Brandon asked an important question in his illegal/unauthorized post, and since I really am genuinely curious about your response (though I do NOT condone his methods) I'll ask it again here:
So here goes:
If you were the youngest (and therefore most picked-on) child in a fabulously dysfunctional family of five, and you had the choice between the following, which would you choose?
Plan A:  A trip to Utah to attend a family reunion at Aspen Grove with the Call Kids.  (Plus, we'd probably have a reunion with Doug's family too!)
OR
Plan B:  A trip to one of the following for the same price, possibly much less; Australia, Thai Land, or China.
A few points to help you make your decision:
* We just hit our one year mark here.  Only two years left to visit the locals mentioned in Plan B.  (Cause let's face it:  It's now or never.)
* Whereas, Aspen will always be an option.
* Family Reunions are great for kids.  Aspen is great for family reunions and the kids would have a blast with their cousins.   Which I do realize is important.  (I always loved seeing my cousins at reunions growing up.)
* ...But did I mention it's really REALLY REEEEEALLY expensive?  And they'd have as much fun at the local park with their school friends?
* Some of my family members don't like me that much.  In fact, I'm not even on speaking terms with all of them at the moment.  Which is surprising considering how naturally charming and witty I am.  (People who aren't my siblings really like me!  Really!!!)
* Jenny and my SIL Christina still like me.  (I think.  Haven't talked to Jenny today...)  (Christina, you rock.  Thanks for defending my blog.  Get better SOON!!!)
* We would get to see Doug's family and they're super cool.  (Though they don't tell as many inappropriate jokes.  Is that good or bad? You decide.)
* Absence makes the heart grow fonder.  Just think of how much everyone will love us if we stay away another 2-12 years.
* A little of my family goes a long way.
(And if you'd like to argue that sentiment, Brandon, please recall your recent de-flowering of my blog and all the arguments I managed to get in in a short 5 day period.)
* Trip to Utah: 24 hours of travel x 3 kids = 72 hours of hell.  (Trust me.  The math works)
* Trip to Utah: 2-4 days of jet lag x 3 kids = 12 lost days.  (Trust me again.)
* Did I mention Australia???
So, what say you blog readers!?!?
Please cast your vote:  I even designed a poll for the sidebar!  (Why?  Because I can.)
Plan A = Utah
Plan B = Dream Vacation
Now let your voice be heard!!!
*Also, please feel free to send as much spam as you want to the following e-mail address:
brandoneous@gmail.com*
12 comments:

Playing Uno on the back porch...(a recent obsession.)
Thomas:  "It's not about winning.  It's about having fun."
Maxwell:  "No, it's about winning and having fun.  'Cause winning is fun!"
6 comments:

Just so you know:
I've gained a little weight over the past year.
And I've made some unfortunate wardrobe choices.
(The empire waist may be "in" but it's not slimming!)
This has led to a few people asking me if I'm pregnant.
The answer is no.
No, I'm not.
But we have been trying unsuccessfully for a year which has led me to soothe my soul with copious amounts of M&M's.
So in a way, I AM carrying a baby.
A ten-pound food baby.
(We're happy together.)
Just wanted to clear that up!!
Oh, and one more thing:
To the Bratty Girls in 1st-12th grade who used to look me up and down and say
"UGH!  You're so SKINNY you make me SICK!"  (Not a compliment.)
I just have one thing to say:
...I'm still skinnier than you.
Sorry.
xo
-Em
(But to all you NICE girls out there, don't worry!  You are WAY skinnier than I am!  Really!  I'm so sorry for being bratty!  It's because it's way past my bedtime and I had way too many M&M's tonight while watching Burn Notice!  Can you forgive me???!!!???)
12 comments:

Email ThisBlogThis!Share to TwitterShare to FacebookShare to Pinterest
Labels: It's past my bedtime and I'm cranky

I just got an IM from my mom.  In a few short hours, she'll be on a plane headed for the Dominican Republic.  Awesome!  Tropical weather all year round.  Aren't ya sorta jealous?
Well, for those of you who aren't headed to an exotic destination, here's something to keep you busy...  Head over to Gratuitous Reviews for a book review and giveway!  You wont want to miss this one!
http://gratuitousreviews.blogspot.com/2009/07/hard-times-and-holy-places-book-review.html
Good luck!
Em
No comments: