"New York Trip" or "When I DIDN'T Get to Meet GLENN BECK!"

Kim and Cliff are doing some travelling to the Church History Sites and have been gone for the last two days. So yesterday, me and the boys did some travelling of our own. My sister Karie is visiting New York City for a few days so yesterday we went down to see her. Doug had some research to present in Brooklyn for the afternoon so it worked out perfectly. Here's a little re-cap of our trip: (for posterity.)
Woke up shortly after 6 a.m. with high hopes of catching an early train.
Realized that packing for one day is surprisingly hard and left late.
Drove for two hours listening to the following:
Can we listen to kid music? Can we listen to a different c.d.? What's happening? Can we skip this part? This is boring! I wish I could go to school today. I don't want to miss school. I'm tired! I don't want to take a nap! I'm not tired! I don't want to rest! I'm hungry. Can I have a snack? Why can't I talk? Why do I have to look out the window? Why are we going to New York? Why is Aunt Karie going to be there? Did you bring anything for me to do? I'm bored! RRRRRRRRROOOOOOAAAAARRRRRR!!!!! (Max)
AAAAAAAAAHHHHHHHHHHH!!!!!!!!(terrified Sam)
Are we late? Are we going to miss the train? Why are we going on a train? Is that the train? Where is the train? Are we there yet?
Repeat ad nauseum.
9:20 a.m. Arrive in New Haven, Connecticut to catch the commuter train to New York City. Thoughts of comfy seating and dining cars flit through my head.
9:30 a.m. Board commuter train which is very similar to the subway. Dining Car dreams vanish.
9:33 a.m. Boys are excited to be on a train.
9:40 a.m. Boys are sick of the train. Except for Gabe who is really wants to explore the filthy floor.
9:46 a.m. Loud yammering starts again all while boys either stand, sit, fall, crawl, claw, punch, push, and/or pull.
9:47 a.m. Think wistfully of minivans with child restraints. 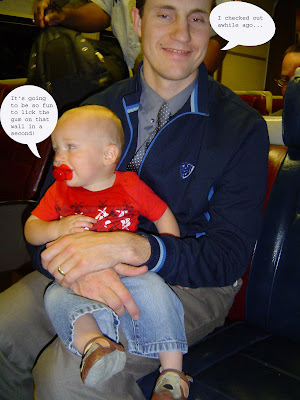 9:50 a.m. Someone steps on Gabey's head while we're trying to change a poopy diaper. Screaming ensues.

9:51 a.m. While comforting Gabey, we realize his shirt is already soaked with drool and we forgot to bring a bib or spare shirt. In addition, his shirt smells like mildew and it's getting worse the wetter he gets.
10 a.m. Doug falls asleep in self defense.
10 a.m. Emily pokes herself in the eye just for something fun to do.
--I've blanked-out the rest of the train trip.--
11:20 a.m. Arrive in Grand Central Station where we meet up with my sister Karie and her friend Lori. With two youngest boys in the double stroller, I threaten Max's life a few times, and send Doug off to his Research Thingamajig.
Lori is in town for some business and, while in town, has been invited to meet Glenn Beck and attend a taping of his CNN News Program. Karie is tagging along just for fun. (The injustice of this whole situation is, Karie has just come to know and love Glenn Beck recently. I've loved him for Much MUCH longer and listen to his radio show at least bi-weekly if the kids aren't demanding my attention.) Emily is EXTREMELY JEALOUS. 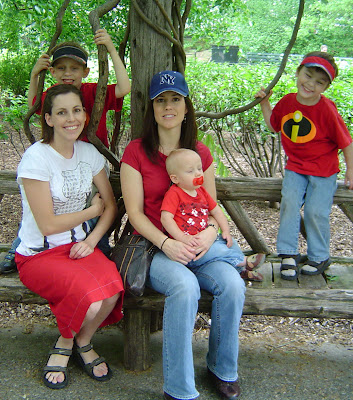 After hanging with Karie and Lori for awhile, they leave to go meet Glenn Beck. (Still jealous!!!)
The rest of the day is filled with an EXTENSIVE amount of walking, stroller pushing, and child scolding...but I'm going to have to get to that tomorrow. I know most of you have just been skimming for the last 12 paragraphs anyway. (You miss good stuff that way, ya know!)
Part 2 tomorrow!
TTFN!

***It should be noted here that taking the train DOES have several advantages! The avoidance of hazardous driving conditions and the problem of parking in "The City" are two of the largest. And for those two reasons alone, I'd probably do it again!***

I think I need a nap after reading that post! If I ever get to go to NY remind me not to bring my children. (Not without my husband immediately on hand anyway.)

Poor Gabe! Did the person who stepped on his head feel terrible, beside him/herself with grief, inconsolable, wretched, devastated, desolate, and comfortless?

If not I think you should have stepped on their head!!!!


I am not an skimmer and I take umbrage at the mere speculation on that matter!!!!!!!!!!

anniebugs said...
This comment has been removed by the author.
7:29 PM

Wow, that sounds simular to our train ride to New York. *sigh* Glad you and all children survived the ordeal!